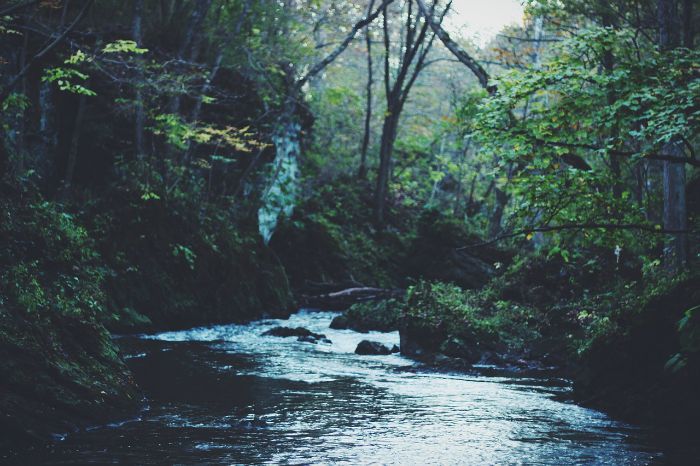 The first fight I saw my dad get into while fishing blew my mind as a 9 year old kid.  I will never forget the moment that he pulled off his watch and his teeth as he approached the dude.

I knew this was going to be more than a conversation at that point.  This was my introduction to improper fly fishing etiquette.

We were driving up to the fishing pool just upstream about ½ a mile from camp.  We passed this dude who was walking up the road to pick up his shuttle vehicle a few miles up river.  As we drove by him, he was cussing my dad out.

Here’s what happened – He had asked my dad back at camp if he could have a ride.  My dad said no and left it at that.

Shortly after passing the dude along the road, we turned into the pull out at our pool.  My dad said wait here and started to walk towards the dude who was on the main gravel road.

This brings us back to the point where my dad was taking his teeth out.

I slowly followed so I could see what was going on.

My dad stopped the guy in his tracks and told him he was way out of line.  He was even tapping this dude on his chest and telling him where he stood.  The dude said “you tap me one more time and I’ll knock your block off.”

My dad proceeded to tap him again – Then the dude took a big swing and missed on a glancing blow.  They both ended up on the ground in a mix of gravel, dirt and spit.  Or in the mud, the blood and the beer – As the great Johnny Cash would put it.

Just at that moment, by brother came up the same road with his buddy.  Chris thought my dad was having a heart attack and this dude was doing CPR or something.  When he realized it was a fight, chris got out and pulled the guy off.

After the guy took a swing and missed -Chris clocked him with a left handed round house he wasn’t expecting.

The dude dropped to the ground with this one shot!  I stood there on the side of the road – stunned.

I’ve never been a fighter.  I’m not sure what it is, but have never been interested.  My dad on the other hand was brought up in a different time.  A time when you fought for your fishing water – literally.  So, this was not that out of the ordinary for my old man.

Swinging flies for steelhead is a little different than many techniques because you are fishing long runs at times.  Sometimes on remote rivers and sometimes in combat fishing areas.  Next time you arrive at your run and some dude is bearing down on you, I want you to feel comfortable knowing what the proper etiquette is on the river.

This size of the area you are fishing will determine your bubble.  It’s kind of like the bubble that’s around all of us when we talk to someone else.  You feel a little weird when someone is a little too close and pushing on your bubble.  You know, that “close talker” type of person.  Remember the seinefeld episode on the close talker?

We don’t want to be that person on the river.  You should understand the water that person is fishing and give them  plenty of room.  How much is plenty of room?  Well, that depends.  Wherever possible, let that person hae the whole run.  If it’s busy, you might have to share the run.  Here’s a few things to think about.

Where to start in determining your distances?  Typically when swinging flies, you might be casting up to 80’ so that’s a start.  You can start by doubling that number to give us 160’.  That feels a little better, right….. but is that enough room?  Let’s answer that with the next section. Fish Behind – Not In front

If you are going to fish near another fisherman, the best etiquette is to ask them if you can fish behind them.  That way they get the first crack at the good water.  You should still give them plenty of room.

Figure out how long you will be casting at the maximum distance and double it.  Stay away at least that distance.  Then as the guy in front works down, stay with his speed or a little slower if nobody is behind you.

It pays to give that person plenty of room so the run settles a bit before you come through anyways.  This is the great things about steelhead fishing.  The guy in front may not have covered the water or missed one little spot that you can key on and pick up fish.

What about when you come up to a steelhead run and nobody is fishing but there is a camp right in the middle of the run.  The best thing to do here is to stop in the camp and ask the people if they mind if you fish through the run.  By far, the majority of fisherman will be happy to say yes and watch you fish through.

Just ask first and you should be good.  The majority of scuffles I have been around on the river developed because some dude just jumped in the run without even saying hi.

Stepping in downstream of someone is usually a no no, unless you are on a section that is super busy and you are jumping in well below the person above you.

If you are going to jump in front of someone, be sure to give them a lot of room if you can’t ask them for permission.  All rivers are different and a crowded river in the NE is different from swinging flies on a large west coast river.  So, you have to figure out the specifics of that water body depending on the amount of fishing pressure.

In some situations, combat fishing is to be expected and you should be aware of this going into it.  But, when you are on a river with lots of room, there’s no reason to jump in front of someone just because it’s your favorite run.

Listen to Jack Mitchell in episode 002 of the the Wet Fly Swing Fly Fishing Podcast at the 30:00 minute mark to see what Jack notes as the best way to determine how fast to step through a run.

Better said – keep moving.  There is this guy I see every year that comes in with his gear and sits on the money hole as fly fisherman have to step out, get on the bank and walk around this guy.  You know who you are, backwards hat dude.  Not Cool G.

With swinging flies for steelhead, you should keep moving.  Just use that steady step-cast-swing and step process.  Here’s how you do it.

I’ve been on sections of river that were super busy.  I know what it’s like.  It kind of sucks but is the way it is.  You have to understand what’s going on around you and keep up with the pace.

If you want to do your own thing, find a section of water where there isn’t 10 people waiting for you to fish.

And, drum roll please……. don’t forget about the golden rule.  How would you like it if somebody jumped in 40 feet downstream of you?  Yeah, I’d be pissed too.  And this type of thing is what might put me in that mindset where my dad was at 30 years ago.

When you find yourself in that place eventually when you are the person that is cut-off by a newbie, take the time to explain to them how they were wrong.  Don’t be an ass, but try to educate that newbie.

Remember to talk to the other fisherman and check in before you drop into a run.  Once you get in, just keep up with a normal swinging pace.  And if all else fails, just remember that rule from childhood and you’ll be golden.  Ha, I couldn’t resist on that one.

Fly fishing etiquette is important to understand any time you are interacting with other anglers.  If you found this helpful and want more tips, click on the button right below this text. 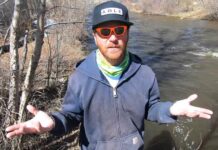