I had no business being out there. The sun, despite its spring like warmth, had yet to begin melting away winter snow, but enticed me out of my winter slumber in search of open water steelhead fishing.

More specifically in search of steelhead; steelhead that had been cooped up in small river holes for as long as I had been in my basement; fish that had been waiting months to finish the last leg of their journey; fish that were sure to be hungry.

The accumulated winter’s snow was deep; walking was tough. A lack of foot prints meant that the warm sun had called to me and only me. These fish were untouched, waiting for a spring feast to restore energy lost during the last couple of cold months.

A few yelps from not so distant coyotes and at that very moment I could not have felt more alone. Just the way I like it. No one to distract me; no one to misconstrue my ramblings as I consider, out loud, my next move; no one to spook my fish.

I had no business being out there. The ice on the river was not breaking up and there was at best a couple of feet of open water running dead center of the pool that I now stood beside.

It was perfect winter holding water, but the shelf ice made it nearly impossible to fish. Nearly impossible, but not completely. Sliding feet first down the bank I stopped just short of the river. Ice is incredibly unpredictable with water flowing below it; the edge of that ice was far enough.

I was now faced with a cast of twenty feet to a target of a couple of feet. Not an easy feat and my first couple of casts were off the mark. It wasn’t long until I found my rhythm and my first real drift was underway.

I lost myself in a moment and was snapped back to reality by the tug of my first steelhead of the day. A brief fight ensued and the fish bolted under the ice and stopped. I couldn’t move it.

One gentle step after another I snuck out onto the ice, hoping for some leverage. Leverage that I did not get. The line quickly went slack and I lost my footing. When I hit the ice cracked; cracked but did not break. Before I could get back on my feet the fish was gone. No problem, I wasn’t sure how I was going to land it anyway.

The morning continued in similar fashion. Drift after drift resulted in hook-up after hook-up. A stellar day to say the least.

The last fish of the day was different. All day it had been four or five pound fish. This one was much bigger; I could tell the moment I lifted the rod to set the hook.

The rod bent to the cork and the slow, methodic head shakes made me question the integrity of my six pound leader. This fish was pushing everything, gear and body, to the limit. It was all I could do to horse the beast out of the dark depths.

When I finally got my first glimpse, something came over me. Call it greed or selfishness, whatever it was I had to get this fish up onto the bank. It was a trophy, the kind of steelhead I lose sleep over.

In all my years on the water I had only seen a couple of steelhead this big, and for the river I was fishing this was as big as they came. I needed to get her up quick, get a couple of photos and get her back in the water.

Adrenaline, mixed with sudden urgency and slight panic is a bad combination. What seemed like an eternity was really probably less than a minute from start to finish.

The head shakes; the initial look at the fish coming up out of the depths; trying to haul the big dark hen up onto the ice and the snap that followed, it played out quickly, even if it didn’t seem like it.

I can make up all kinds of reasons of why it happened, but the truth is I was so concerned with getting a couple of shots of the fish that I lost track of exactly where my rod was, and the angle at which I was holding it.

Even though I had never heard it before the sound was distinct; distinct and deafening; deafening and heartbreaking. As the fish slipped back into the darkness, the top section of the rod followed it, disjoined from the bottom and sliding down the line.

For the first time in this entire process I thought clearly, reached out and grabbed the top section before it disappeared. I then grabbed the line, gave it a quick, hard tug and released the fish of a lifetime.

I hand bombed the line in, set what was left of the rod down in the snow and surveyed the damage. The shards of black graphite stood out on the white backdrop. I stood and stared, surprisingly calm considering I was looking at a shattered version of my first custom fishing rod. I picked up the pieces of my broken rod and moved on. What else could I do?

I will never forget the sound the rod made as it snapped; never forget gathering the pieces from the snow; I close my eyes and it’s a vision as clear as the day it happened.  But those are memories that I can easily shake off, it’s the loss of that trophy steelhead that haunts my dreams.

This steelhead success story came to us from Dan Robson.  You can send me an email or Dan an email here with any comments.  Thanks for putting this one together Dan.  Great story! 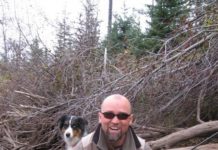 The Greatest Fly Fishing Experience of My Life 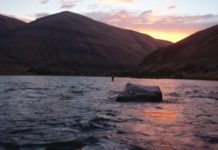 I lost 13 Steelhead, Now What? 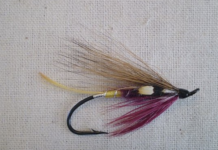