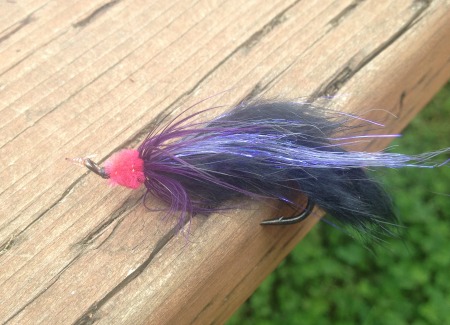 Why do steelhead take a fly?  Becasue they are looking for food – Maybe?  Because they have instincts from their juvenile self from 2 years previously – Likely?  Because they are aggressive fish and just get pissed that there is this little nagging thing in front of them – Oh Yeah……

All of these scenarios are likely correct at some point in a steelhead’s life.  But, what can you do to entice the fish to take a fly more often?  Size and coloration varies with the water conditions you are fishing, but a little bit of flash….. Well, this might be the X-Factor.

I’m not talking about a ton of flash, just a little to highlight and bring attention to your fly.  It might only take a few strands of krystal flash to make the difference between your offering and the guy next door.  All things being equal, I’ll go with a little flash any day of the week.

Here is an example of a small, sparse steelhead pattern that looks pretty nice and even better in the water.  Can you see just the hint of pearl krystal flash tied under the wing.  The steelhead notice it.  Here’s a totally different pattern without flash.  Do you think the bugger could use some flash?  Yeah, I do to.

I will be tying this same pattern as a beadhead flash-back very soon, so stay tuned.  The flash-back was noted recently by the Joseph Fly Shoppe as one of their go to favorites for steelhead.  I was able to talk a little shop on a recent visit to the north eastern part of the state.

Make no mistake about the vision of fish – It’s awesome.  I’ve caught plenty of steelhead during periods when fishing regulations may have been pushed a bit.  So, remember – Adding that subtle little extra,  It just might end up being a big deal.

Next time you are tying or choosing a steelhead fly, grab the one that has a little flash.  Not a lot – but, just enough to give that fish a reason to go for your offering above the rest.  Do you tie flies?  Click on the link below to get more tips like this sent directly to your inbox. 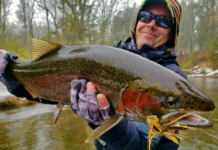 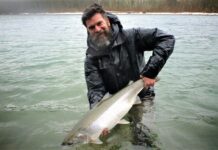